Stringfellow put the Titans on the board in a school recording breaking :24 second goal, the new fastest goal in school history. The record was previously set this season by Freshman Sarah Wynn. Sophomore Ashlyn Hall had the assist on the play with a perfect ball for Stringfellow to put on frame.

In the 28′ the Vikings responded with a pk goal. It was the third penalty kick against the Titans this season while they have yet to be awarded a single one. The Titans used the opportunity to respond and once again it was the combination of Junior Lexi Chenoweth (6th assist of season/career) to Hall to Stringfellow that provided the game winning goal. Hall now sits with 20 assists on the season, while Caroline leads the team in goals with 27, it was also her 4th game winning goal. The Titan defense held strong in the second half, punching the Titans first ticket to the state semi finals. 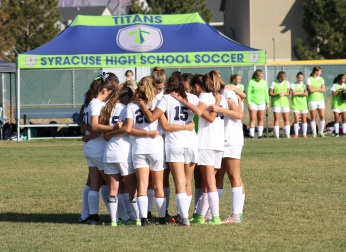 Senior Gabby Segura had 4 saves on the day and collected her 34th career win in net. The Titans out shot the Vikings 13 – 10, putting more shots on goal as well 6 – 4. They also had more corner kicks 5 – 3 and won the offsides battle 1 – 7. Stringfellow had her potential hat trick called back on an offside call in the first half. 2 yellow cards were issued to both teams. The Titans finished the season with a perfect home field record, 9 – 0. The first perfect home season in school history.

The Titans now continue their march to a state title in a semi final match up against the Region 4 #3 seed the Bingham Miners (10-8-0, 5-7-0). The game will be played Tuesday October 17th at 11 am at Juan Diego High School and will also be live streamed on Deseretnews.com. State semi final information can be found here.

View all posts by taallen322