In a heavyweight battle of region leaders, the Syracuse Titans (9-0-0, 5-0-0) continued to defend their home pitch in a 3-2 win with a double over time golden goal over the visiting Layton Lancers (6-2-0, 3-1-0) on Tuesday afternoon.

Senior Adriana Owen had herself a day with her first career hat trick (6 goals season, 8 career)! The 17th in school history and the third trick of the season for the Titans. 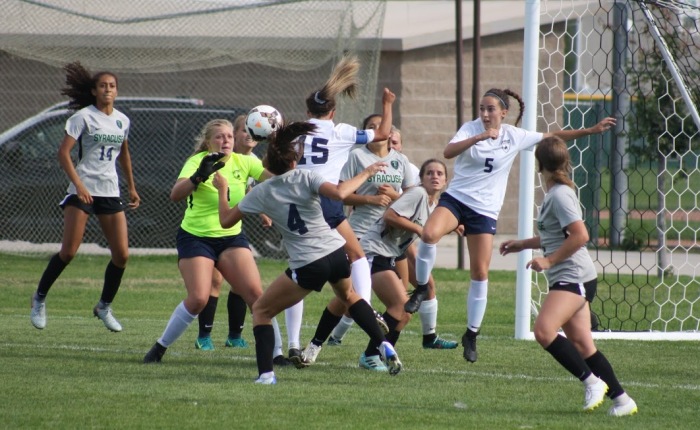 Owen began the scoring for the Titans off of an assist in the 34′ from Ashlyn Hall (4th season, 34th career) and Caroline Stringfellow.

After Layton battled back to tie the game off of a 60 yard free kick header, Owen secured her second goal of the game off of a Sarah Wynn cross in the 38′. The Titans narrowly missed two opportunities at the end of the half to secure the two goal advantage before the break.

The lancers tied up the game in the 53′ leading to the overtime drama. After the first 10 minute overtime expired, the Titans dominated the second overtime with multiple scoring opportunities. In the 3rd minute into the extra period it was the younger Stringfellow (9th assist of the season, 41st career) to Wynn connection for a perfect ball backside of Ashlyn Hall to a crashing Owen (Wynn’s 11th assists of the season, 22nd career). Completing Adriana’s first game winning goal of the season, 2nd career for the Senior forward.

Senior goalkeeper Brooklyn Stringfellow had 14 saves on the day and earned her 5th victory of the season/career. The Titans are now 4-3-4 in overtime games in school history, this being on the second double overtime win in the 12 years that the school has existed. The Titans now have an overall record of 6-17 against the Lancers.

This Thursday the Titans have a much needed bye before finishing the first round of region play at Fremont (1-5-1, 0-3-1) next Tuesday. Prior to last season Syracuse had never beat Fremont in a soccer game. The series now stands at 2-16 in the Silver Wolves favor.

View all posts by taallen322